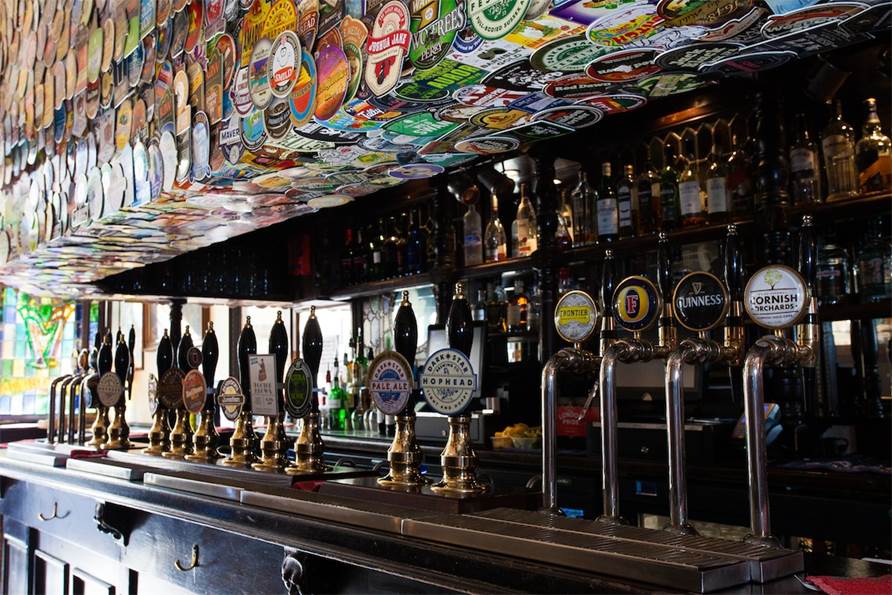 When you travel to London, you simply have to drop by a nice British pub. It’s almost impossible to avoid and it’s also a big part of many travelers itinerary, but I would also recommend it to people who would not usually consider going to a pub in your home country.

The British pubs are such an integral part of the British community that you’ve got to visit at least a couple of pubs when going to London and Britain in general.

The pub is an abbreviation for the word ‘public house‘, so if you think of a pub as a crowded place where you only come to get drunk – think again. In Britain, the pub is the place where you meet your friends over a pint for a quite chat or a place where you sit down and read the newspaper for yourself.

Of course there are also plenty of pubs where the atmosphere changes when it gets dark outside, but basically the pubs are usually quite quiet and extremely cozy.

One of the things I love most about traveling in Britain are actually to go down the local pub, having a nice British ale (London Pride is a must try if you’re in London and it’s not too heavy) and just watching the people at the pub.

Are you ready for a pint?

Then check out these 3 great Central London pubs.

Let’s start with one of the best pubs in Central London, The Harp. The pub is old and that you’ll spot straight away when you see it from the street.

Despite being located in some of the most central areas of London, Covent Garden, it’s actually hidden a little bit away from the tourists on a relatively quiet street.

Inside The Harp in Covent Garden.

So you sort of have to know it’s there to go there – which means there usually aren’t too many annoying tourists around.

The beautiful selection of beers in the Harp.

True beer lovers will know this place though as it’s been voted ‘best pub in the UK’ before and as it’s been around for ages it attracts a lot of regulars from the area.

The pub is now owned by Fullers Brewery, which helps keep prices at a fairly reasonable level. In addition to Fuller’s beer (London Pride among others) there are also classics like Guinness, Fosters and a nice selection of cask ales in the bar.

If you’re not a fan of the (amazing) British ales then try the Fullers Honey Dew!

The Harp is quite close to many of the most famous sights and attractions in London.

If you’re only going to visit one pub in Central London, I’d say that Princess Louise is a good place to go. It’s a distinctive pub, dating all the way back to 1872.

The decor is quite atypical for a pub in Central London, but this is a perfect pub for those who would like to sit alone or with a small group and enjoy a few pints.

The pub is built around the bar, shaped like a horseshoe and you can sit in smaller stalls around the bar and order drinks or food from the pub menu.

Princess Louise is now owned by the brewery Sam Smiths, which means that you can only drink beer from their brewery.

However, this does not matter to me, as I love both their lagers and bitters – and prices are decent considering that the pub is right next to the busy Holborn tube station right in the heart of London.

Grab a pint and head out to see a musical in Londons West End.

Another classic small pub in Central London is the Star & Garter. It’s located right in the heart of London’s vibrant Soho area – close to eg. Carnaby Street and Oxford Street.

The pub is also popular with the few people who can still afford to live in Soho so if you want to avoid hanging out with too many tourists, Star & Garter is a great place to go when you’re in need of a pint.

The pub is quite small, but that’s part of what makes it nice. Check it out and see if you can get a seat. It may be a bit more expensive than other pubs in Central London, but you’re also supporting the last independent pub in Soho!

Other excellent pubs in Central London include Coach & Horses, The Ship and The White Horse.

Enjoy your pints in the many good Central London pubs!

Have you sorted out your accommodation yet? Otherwise check out my huge London Hotel Guide.

The 9 Best Free Museums in London